How ROI is Calculated for You

The Background on our ROI Calculator

Determining a Return on Investment is a business owner's number one priority, and we created a calculator to help you figure out whether our SV2 PCB Printer is good for your business instead of other PCB prototyping solutions. In essence, we take the savings made from owning an SV2 - Professional and calculate how long you'd have to continue printing (assuming your prototyping load doesn't change) to pay it off. The payback time would be quicker with an SV2 Enhanced or Starter, but you may not be able to prototype the same designs as you usually can.

We understand ROI as the dollars you save using SV2 versus a PCB vendor and assembly house, and we focus on prototyping orders of one assembled PCB, not production runs. There is no 'average board' as there are lots of important considerations to be thought about when creating a PCB (ie gold fingers? tented vias?), so we tried to quote vendors for a board that was roughly equivalent to something made with SV2. Here are the following specs we gave board fabrication vendors:

For situations where shipping costs were not included, we charged $100 for any of the orders that were ready in a week and $45 for anything longer than that. After collecting the pricing, we divided the number of layers in each quote (we asked for quotes for each variant that had different layer counts) and the size of the board to produce a unit of dollars per square inch per layer.

When we calculate the cost of a third-party board, we use this chart as a price reference by looking at the user's input delivery time and layer count and multiplying it by the size and layer count.

It showed to us that delivery time and the layer count affected pricing significantly. Delivery time was no surprise, but it was interesting to see that as one orders a board with more layers, the cost doesn't necessarily go down. A one-square-inch board may cost 2x that of a single layer board, and that reflects the manufacturer's extra work in terms of drilling and plating more vias (see our post on how PCB vendors make boards here!) 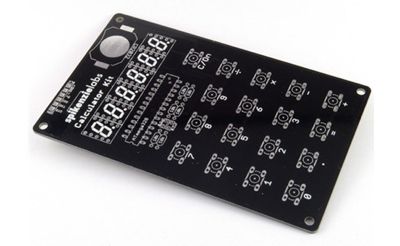 How we calculate our costs

As you can see, the cost of a single square inch will cost the same and be done in less than 15 minutes. Even the largest 4 layer board made with an SV2 will take less than a day (delivery included!). We calculated these values by multiplying the amount of ink needed to make a solid silver trace (like a pour) so we consider these values to be 'worst case'. The cost of an SV2 is not included here - when we run the ROI calculations we take the savings of making a board with the machine to be placed back into the purchase to create the payback time.

Calculating assembly costs was rather difficult as doing a prototyping run of one board with an assembly house is quite uncommon. The setup costs for an assembly run is extensive, so a run of one board or twenty is roughly the same cost. The prices and delivery times between vendors varied so much that we concluded that a single average price for an assembly run would be sufficient for our calculator. BotFactory has relied on assembly houses for our boards and most of the cost was embedded not in the wait time or assembly costs, but the time spent talking with the assembly house to make sure that the design was correctly formatted, the Bill of Materials finalized, etc. Using SV2 to do dry runs to ensure that the board was assembled correctly is an important step to ensuring that each diode and connector is placed correctly.

See how SV2 can save you time and money right now

The value of saving money comes from saving time